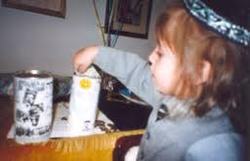 Yesod V’Shoresh Ha’Avodah writes that the days of Chanukah are particularly auspicious to correct the flaws in Man through the distribution of tzedakah, charity, especially to those who are engaged in the study of the Holy Torah and supporting them.

Children are accustomed to going around during Chanukah collecting tzedaka for scholars because the Syrian-Greeks wanted to uproot the three “pillars that the worls stands upon; Torah [study], Service of Hashem and performing acts of kindness”. To this end, this custom was enacted to strengthen these three things.

Parallel to Torah [study] is the lighting of the menorah, which, as explained elsewhere, that the verse in Proverbs that states, “For the commandment is a lamp; and the Torah is light;” implies that the kindling of the Chanukah candles lights the way for Torah to enter the heart. Analogous to the service of Hashem was the institution of singing praises and hymns and the equivalent of acts of kindness is the generous distribution of charity to Scholars of the Torah