Another Reason for the Dreidel on Chanukah 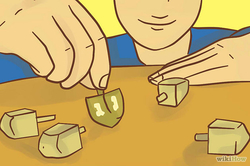 The dreidel spinner is grasped from its top and set to spin. This is symbolic of the heavenly inspiration that brought about the courage and bravery of Yochanan, Mattisyahu and his sons, the Macabees to wage war against the Hellenists that tried to destroy the Jewish nation during the times of Chanukah. Whereas the miracle of Purim came about through the fasting and praying of the Jewish people under the leadership of Mordechai and Queen Esther, an inspiration from below. So we use a grager on Purim to drown out the name of Haman every time it is mentioned during the reading of the Megillah, which is grasped from (the handle) below.