The Custom of Eating Dairy and Cheese on Chanukah 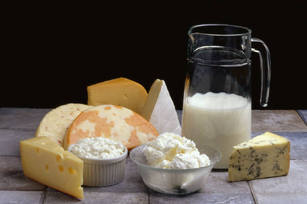 Another reason for the custom of eating milk products on Chanukah is that the Hebrew word for cheese, חלב, (CHoLoV) hints to the three things that the Greeks wanted to absolve from the Children of Israel; the observance of the New Month, circumcision and the Shabbos. The Greeks hoped to conquer the Jews and take over Jerusalem by enacting decrees against these       three basic mitzvos.